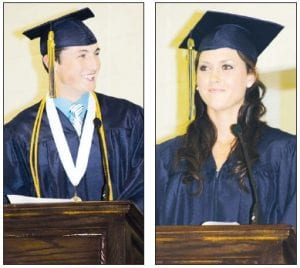 Chandler Tuckerman and Abby Short, members of the Archbold High School Class of 2012, were among those who received diplomas during ceremonies Sunday, May 27 in the AHS gym. The two were selected by their classmates to deliver the student addresses.– photos by David Pugh

If there were a theme to the graduation ceremony, Sunday, May 27, for the Archbold High School Class of 2012, it was thank you.

Speakers in the AHS gymnasium gave thanks to students, parents, teachers, friends, relatives, and community members.

Abby Short, one of two speakers from the graduating class, told the audience, “each and every one of you has been part of the life of someone” who is graduating.

“Each of you deserves a big thank you.”

Jon Lugbill, president of the Archbold Area School Board, told the audience that its investment in Archbold Schools is paying big dividends.

“The Class of 2012 is equipped and ready for continued success,” he said.

He said the school board is committed to continuous improvement, and thanked the audience for its continued investment and support.

David Deskins, district superintendent, told the graduating seniors so many people had left an imprint on their lives, and he hoped each would find time to offer their thanks.

“You would not be here today if they had not offered you their love, support and encouragement,” he said.

Chandler Tuckerman, president of the Class of 2012, thanked the teaching staff “for all of your hard work and effort, even when it was not required of you.”

He also thanked the parents “of each and every students on these bleachers.

“Mr. Meister (high school principal) has always stressed the importance of the parents when it comes to early education skills and moral principles, and I agree with him wholeheartedly.

“Without the hard work and dedication of the parents, we wouldn’t make it far,” he said.

In her address, Short listed some of the accomplishments of the Class of 2012, including:

•choir and band advancing to state competition all four years; and

She said members of the graduating class had earned $2,082,000 in scholarships.

Deskins offered his advice to graduates, urging them to discover what they are passionate about, and pursue it.

“Passion for doing what is right will allow the impossible to become possible,” he said.

Meister told graduates to find a line of work “that doesn’t seem like work.”

He also urged them not to get caught up in the idea that only a large bank account is the measure of success.

Tuckerman urged his classmates to pursue their dreams.

“The only thing stopping us is ourselves.”–David Pugh