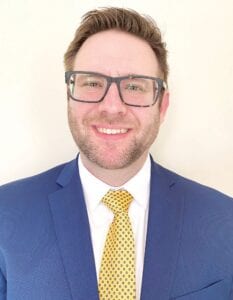 Josh Clark, AHS ‘03 and an Archbold native who is the next Pettisville School District Superintendent starting Aug. 1, has a lot of ties to Pettisville.

His grandmother, Kathy Grieser, was the stepdaughter of Virgil Sunday, who owned Sunday’s Market in Pettisville.

Plus, “I grew up in the church at Pettisville– Pettisville Missionary Church– all the way into my early 30s. I had a lot of exposure to the community and have a lot of great relationships there,” he said.

“I also have a lot of relatives and family who are graduates of Pettisville, and I know they are proud graduates and alumni.”

Growing up in Archbold “and knowing what Pettisville is and the amazing tradition this school district has, they’re all about excellence there. To be part of that would be something very special,” he said.

The Pettisville school district, he said, “is one of the gems of Fulton County, and this part of the state, if not the state.”

Part of that stems from a strong base of involved parents, community support, and outstanding educators.

Being a small school district (less than 600 total students) has advantages, including “a lot of individual educational opportunities,” he said.

“But at the end of the day you can be as small as you want, but if you don’t have that great parent base of community support, it doesn’t really matter.

“It’s that strong unity of the community and the parent support that really makes the place… magical.”

He also cited the “incredible educators over there that make that happen. I think that’s obviously very important.”

Clark said one of the most important things a superintendent can do, “particularly at Pettisville– first and foremost, you’ve got to be a good listener. You have to absorb the culture of the community.

“We’re going to move over there as a family, so we will be a part of that community as well. My kids will graduate from there.”

He compared the experience to “that of the fair fish getting acclimated to the new tank.”

School districts across the country are facing both a moment of opportunity and a moment of challenge.

“We have to build a bridge from COVID to normalcy again. I think that’s going to be very important,” he said.

“If we look at it academically, and also socially and emotionally, it’s going to be the bridge to build.

“I think in a lot of ways Pettisville is very well-equipped to build those bridges, simply because they’ve been in school five days a week, for the most part, in the era of COVID.”

He was the principal at Evergreen High School from 2015-18, and a general education consultant at the Northwest Ohio Educational Service Center from 2018- 2020.

He has been the Director of Curriculum, Instruction, and Professional Development at NWOESC since July 2020.

Josh was selected to be the new superintendent by the school board during its Tuesday, March 2 meeting. He signed a three-year contract that will pay him $105,000 a year.

Josh’s father, Doug, now retired, worked for the U.S. Postal Service. His grandfather, the late George Clark, was a science teacher for many years in Archbold.

“Some of my best moments are when some of his former students tell me stories, and some of those who taught with him– they’re a bit older now, but those are some priceless memories and conversations to have.”

Josh said his grandfather had the catchphrase ‘you rotten kids!’

“No story ever told, is told without that catchphrase,” Josh said.

“He was a big man, he had a loud voice, but he was a teddy bear, so that was said tongue-in-cheek.”

Josh’s wife, Cindy, is a fifth grade teacher at Archbold Middle School. She will stay in that post.

Their third child, Lynley, is 2.

With Landon and Lydia attending Pettisville while their dad is the new superintendent, “We’re going to have the same butterflies on that first day.

“It will be a special moment we can share together,” he said.

A superintendent job is a big one with many diverse responsibilities, from overseeing an educational system to food service and transportation systems.

Will there be any trepidation in starting the new job?

“It’s more excitement, to be honest with you,” he said.

“I just think at the end of the day, if you could sum up the position, you’re in the people business. You have opportunities to serve, to empathize, and make a difference. I think that outweighs trepidation.”

His daughter, however, has a different outlook.