AHS Grad’s Career Is Up In The Air 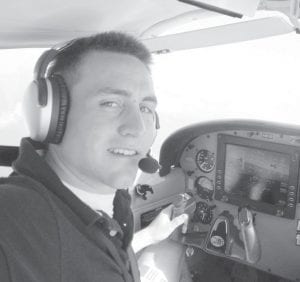 Jacob Lange in the pilot seat of a University of North Dakota training plane. In airplanes, the pilot always flies from the left seat. Lange has already earned a private pilot license; he soon starts on advanced ratings.– courtesy photo

Jacob Lange’s future career plans are up in the air .

Lange, son of Dan and Deb, Archbold, is a student in the aviation program at the University of North Dakota, Grand Forks, N.D.

Lange also was a member of UND’s Flying Team, which won SAFECON, the national collegiate aviation competition. This year, SAFECON was held in May in Terre Haute, Ind.

Lange was an alternate for the national event team, but making the SAFECON team “is a very big accomplishment,” he said.

He said UND’s sixth-, seventh, and eighth-place team members would probably be superstars in another program.

“That’s how the level of competition is,” he said.

UND’s victory for 2010 was the school’s 16th in 25 years of competition. UND flyers defeated second-place Embry-Riddle Aeronautical University by one of the widest margins ever. 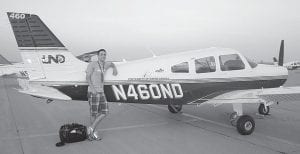 Jacob Lange next to a single-engine, four-seat training plane operated by the University of North Dakota. Lange, a freshman, was one of the alternates in a national collegiate aviation competition. Someday, he wants to step up from a four-seater to a career in the cockpit of an executive jet.– courtesy photo

SAFECON, sponsored by the National Intercollegiate Flying Association, is made of several events, both on the ground and in the air.

Lange was an alternate for the SCAN competition, which is Simulated Cross- Country Area Navigation, a navigation competition done on paper.

Pilots are asked to plan a cross-country flight, and then judges ask them a series of questions, based on that flight. Questions can range from federal rules and regulations to navigation and weather.

While he didn’t get to compete, Lange said he was involved as ground crew for the planes, and helped pilots prepare for their competitions.

He won the individual national championship title in the computer accuracy competition, and was seventh in aircraft recognition.

Lange said he became interested in aviation in middle school.

“I got the idea I could make a career out of it,” he said.

In high school, Lange said David Deskins, superintendent of the Archbold Area School District, arranged for Lange to fly with a friend of his, who was a pilot with his own single-engine, four-seat airplane.

Lange also attended a camp at Western Michigan University, and got another ride in a four-seater.

Lange looked at aviation programs at WMU and Hesston (Kan.) College, but when he stepped off the plane for a visit to Grand Forks, “I loved it. It seemed right. I could see myself here,” he said.

Lange holds a private pilot license, which allows him to fly single-engine aircraft.

Next spring, he’ll step up and take his flight test for a multi-engine license.

He’ll also undergo instrument flight training, which will allow him to fly in bad weather, and start on his commercial license, which enables him to fly for hire.

His ultimate goal is to fly corporate jets, ferrying business executives from place to place.

“I could see myself in the captain’s seat of a Gulfstream (business jet),” he said.

When it comes to flying, “I still feel like a little kid in a candy shop.

“I find it peaceful and free. You can go wherever you want” and get there much quicker than by car.

Viewing a sunset from the air, “you can’t put a price on that,” he said.

“It’s hard to put into words, but I wish everybody could experience it and enjoy it.”