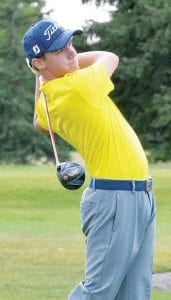 Last year the Streaks shot the best round by an AHS team ever in the championship with 308.

They bested their best by two strokes, finishing with a team score of 306, five strokes ahead of second-place Bryan, who shot 311.

Wauseon was third with 338.

Archbold and Bryan both finished with 6-1 NWOAL records, giving each six points.

Brandon Miller finished second individually, shooting a 75. Mitch Grosjean tied for third with a 76, while Trevor Rupp tied for sixth with a 77.

Kade Kern placed eighth with a 78.

Miller finished as the top individual in the NWOAL, with 106 points. Bryan’s Peyton Lamberson was second with 104. Grosjean was fifth with 100; Rupp was sixth with 96; and Kern was seventh with 94.

“This season started out well, as we had a few more guys who played in the summer tournaments,” said Mike Rosebrook, AHS head coach.

“We came out in the first week and won the first two invitationals, setting a school record of 301 at Auglaize.

“The first two weeks go by really fast, as we have three days of qualifying and then invitationals and nine-hole matches the very next week.

“The real coaching doesn’t happen until after I see them perform a while. I am willing to not play our best early on and change a few swing motions so that we can end the season strong.

“We started tweaking some things after the Red Hawk Invitational, where we got beaten by the host school Van Buren and St John’s. Van Buren returned all five starters after taking runner-up at the state tournament in Division III last year.

“When this team fires on all cylinders, great things happen. I try not to mess with their swings too much right before the tournament so they show up comfortable.

“We have a few guys who are scoring well every day, and a few others whose swings are really looking sharp. Putting it all together and getting a golf team to peak at the right time is the trick.

“They have played their best golf of the year in the last two weeks, and I think we are just getting warmed up.

“Every year we have someone who shoots the best round of their life at this tournament. Then the same thing next week by a different golfer, and so on.

“This part of the season gets pretty exciting. I know how hard all these guys work, so I expect to see some good scores from here on out.”

The Streaks finished regular season league play, Monday, Sept. 18, defeating the Tigers and Indians in a trimatch at Wauseon.

Grosjean was match medalist, with a low score of 36.

The top three teams and three individuals not on qualifying teams advance to the district tournament, Monday, Oct. 2, at Sycamore Springs, Findlay.