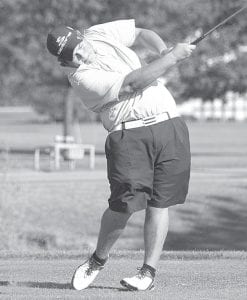 Trevor Neuenschwander tees off for the Blue Streaks.–photo by David Pugh

Bryan won its third straight title, with a team score of 323. The Streaks finished with 349, as did Liberty Center. Archbold finished second because its fifth-highest score, a 92, was one stroke better than Liberty Center’s, which was a 93.

“I am very pleased,” said Kevin Miller, AHS coach. “We had not played as well as we should most of the season.

“As of the last week or so, we had started to bring our scores down closer to where we as a team expected our scores to be.

“In my years as a coach I have not seen wind condi- tions like we experienced on Friday. To have Luke Shaffer of Bryan shoot a 77 is a phenomenal feat. We had some of the best golfers in the league shoot in the mid- 80s.

“I was excited that our golfers battled as well as they did with those windy conditions. I knew we had the capabilities to compete for one of the top spots. We just had to focus and have confidence in our abilities.

“We will need to play better at sectionals. We have the tools to compete. We need to have a strong start and a strong finish.”

The Streaks defeated the Bulldogs by 18 strokes on a sunny cool day at Swanton.

Short and Reisser were match medalists. Each shot a 41.

The Streaks squeezed out Delta by one stroke for the tri-match victory, Thursday, Sept. 23, at Wauseon.

Archbold raised its record to 37-18 with the wins over the Panthers and Eagles.

Delta’s Brandon Bailey was match medalist with a 37.

The top three teams and four individual low scorers not on a qualifying team advance to the district tournament at Bowling Green, Thursday, Oct. 7.