The Archbold golf team started its 2017 season on a winning note, capturing the Defiance Invitational for the second straight year, defeating North Central in a dual match, and winning the Paulding Invitational.

The Streaks edged out Kalida by one stroke to win the Defiance Invitational, Monday, Aug. 7, at Eagle Rock Golf Course.

Kade Kern was low man for Archbold, finishing with an 80 to finish fifth individually.

Kalida’s Christian Nartker was match medalist after winning a two-hole playoff against Wauseon’s CJ Moser. Both finished with low scores of 75. 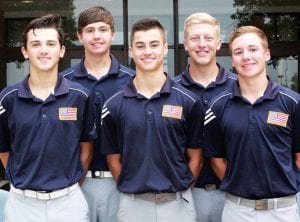 Three Blue Streaks finished in the top six. Rupp was low man with a 73, one stroke behind Kalida’s Nartker, the match medalist . Kern was one stroke behind, with a 74, and Miller had a 76. Mahnke totaled a 78, and Grosjean had an 82. Sims had a 90.

Van Buren, who placed second in the 2016 Division III state tournament, won the championship by 15 strokes over second-place St. John’s, who had 322.

Individually, Kern was low man for Archbold, shooting a 78.