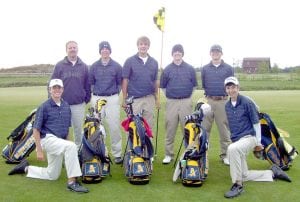 The AHS golf team made history, Thursday, Oct. 2, when it advanced to the state tournament for the first time ever.

The Streaks finished third at the district meet in Bowling Green. Lima Central Catholic won the district championship with a team score of 314. Minster finished second with a 324. Archbold was six strokes back with a 330.

The top four teams and top four individuals not on teams won the right to advance to the state tourney.

Steven Kinsman led AHS with an 18-hole score of 80. Jacob Nafziger and Tyson Bostelman each had scores of 83; Tyler Bernath shot an 84; and Jarrett Yoder had a 94.

The Div. III state tournament is Friday, Oct. 10 and Saturday, Oct. 11 at Foxfire Golf Club, Lockbourne, which is on the south side of Columbus.–Posted 10.3