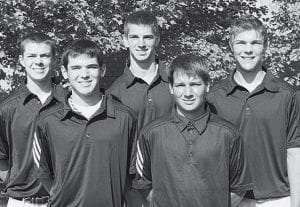 The Archbold golf team, under Kevin Miller, head coach, returns five letterwinners from last year’s squad that went 81-22, and finished second in the Northwest Ohio Athletic League with a 6-2 record.

Miller, who has been at the helm for four seasons, said his five returnees have “lots” of varsity experience.

“We lost three of five starters to graduation, so we have three important spots to fill,” said Miller.

“Our three seniors are competent as leaders on and off the course.”

As a team last year the Streaks won the sectional tourney, were third at district, and placed ninth at state.

“We always try to improve,” said Miller. “We were very successful last year and hope to continue. We want to lower averages, our number of putts, and be as competitive as we can.

“We are excited about the season. We have some work to do, but the Blue Streak golfers are ready for the task. We will show up and we will be competitive.”