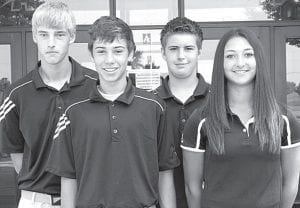 The Archbold golf team, under the guidance of Mike Rosebrook, head coach, kicks off the 2014 season with three letterwinners on the boys squad and two on the girls side.

Rosebrook, who enters his fourth year at the helm, said his three returning boys players are very good at keeping the ball in play and making good contact.

“But with a young team we lack tournament experience and decision-making skills,” he said.

Back are DJ Schroeder and Elijah Miller, juniors, and Ian Radabaugh, a sophomore.

“This year we will talk strategy a lot,” said Rosebrook. “Navigating golf course architecture is our focus.”

Rosebrook looks for Wauseon and Swanton to be at the top in the league race, with Archbold hopefully in the top five.

The flip side of that is with only two girls, it’s tough getting them into matches.

“We want to build on last year’s success,” said Rosebrook.

“Sectionals went well. We have previous experience on our side. Meridith made it to districts, and Cora shot her best round of the year at sectional.”