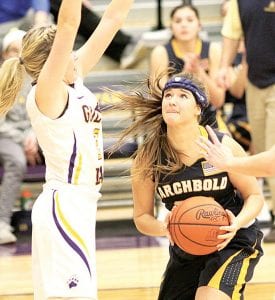 It’s been almost two months since the Archbold girls basketball team suffered its only loss of the season, but it hasn’t been easy.

The Streaks, ranked seventh in Division III in last week’s poll, won three games last week to up their record to 17-1, 5-0 in the Northwest Ohio Athletic League and extend their win streak to 12.

The Blue and Gold opened the week with a 57-39 NWOAL victory over Swanton, Monday, Jan. 29, in the Thunderdome.

The Streaks traveled to Bryan, Thursday, Feb. 1, and came back from a ninepoint deficit to win their second NWOAL game of the week, 54-50, and keep pace with Delta, who is also 5-0 NWOAL.

Archbold finished the week with a 55-51 non-league win over Napoleon, Saturday, Feb. 3.

“This was a nice league win,” said Brian Ziegler, AHS head coach. “Lily Krieger worked hard, and we did a nice job finding her.

“We had better ball movement, which shows in our balanced scoring. We rebounded well, which led to some nice fast breaks. Our defense was very solid, especially with our guard pressure.”

The lead was extended to 18 points, 48-30, after three. Both teams scored nine points in the fourth for the 18-point AHS victory.

Haley Nelson and Sidney Taylor each scored 12 points for the Bulldogs (9-7, 1-3 NWOAL).

AHS won the rebounding battle, 31-22, led by Brooke Kohler and Krieger each grabbing 10. Swanton committed 21 turnovers to eight for Archbold.

“This was a great team win,” said Ziegler. “We had to play much of the game in foul trouble, and our bench gave us some big minutes.

“Bryan did a nice job forcing us out of our offense the first half. We attacked them much better the second half.

“Gabby Nafziger hit some huge threes to get the game close that put momentum on our side.

“I’m proud how we competed tonight. I can’t say enough about the effort we gave.”

Archbold slowly came back in the third period, cutting the difference to four, 37-33, on an A. Peterson three with 3:02 left in the period.

A Krieger basket after a Bryan turnover tightened the gap to two, 37-35.

Sidney Lamberson hit a deuce to put Bryan back up by four, 39-35, but Emie Peterson hit two foul shots to pull AHS back within two.

Nafziger hit her first of two treys to give the Streaks their first lead since the first period, 40-39.

Kelly Miller answered with a three of her own for Bryan.

Both teams answered baskets with baskets of their own until A. Peterson hit with 1:35 left in the game for a 51-50 lead.

Hostetler led all scorers, with 14 points. The Streaks hit seven treys, with Nafziger, Blair Bucklew, and Hostetler each hitting two and A. Peterson, one.

“This is a good win for the third win of the week,” said Ziegler. “Our bench came through big again as we had to deal with foul trouble again.

“Faith Wyse, Brooke Kohler, and Gabby Nafziger gave us a big lift. Blair Bucklew, Emie Peterson, and Kamryn Hostetler did a nice job with balanced scoring, and Lily Krieger and Andi Peterson did a nice job inside.

“Other than some silly fouls, we had a nice defensive effort on one day of preparation.”