AHS Girls Up Record To 15-1 With Victories Over Holgate, Patriots 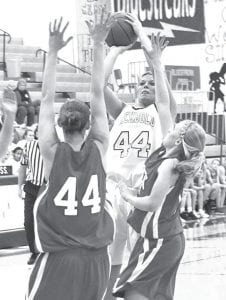 Stacy Wyse (44) attempts a shot over the arms of Patrick Henry’s Jenna Badenhop (44) and Krystin Reiser, right. Archbold raised its record to 7-0 in the NWOAL with a 49-42 victory. Wyse led the Streaks with 11 points.–photo by Mary Huber

Archbold jumped out to a 17-8 first-quarter lead over Patrick Henry and held off the Patriots for a 49-42 Northwest Ohio Athletic League girls basketball victory, Thursday, Jan. 28.

The Streaks were on the road at Holgate, Saturday, Jan. 30. Archbold led 25-23 at the half and defeated the Tigers 53-48 in non-league action.

Stacy Wyse led Archbold with 11 points. Galvan was also in double figures, with 10.

“I thought our half-court defense was pretty solid most of the game,” said Brian Ziegler, AHS head coach.

“We made a nice adjustment with our zone offense, and got the ball in the middle for some baskets.”

Both teams grabbed 27 rebounds. Devin Newman and Galvan each had six for AHS.

“Both teams played hard for four quarters,” said Ziegler. “I thought our team defense was as good as it has been. We had intensity and were focused at what we needed to do.”

The score stayed close throughout, and the Streaks were up 39-35 going into the final eight minutes.

“I thought we executed very well on offense against a good defensive team,” said Ziegler.

“Devin Newman did a great job staying after the ball and getting 14 boards.”

The Streaks won the rebounding battle 39-24.

“Our free-throw shooting was huge, especially in the second half when we made 12 out of 15. Our balance again on offense was a big key as well,” said the AHS coach.

Archbold made 17-27 free throws in the contest, while Holgate was 8-12. The Tigers hit four three-pointers, while AHS had none.

The Streaks had four players in double figures. Graber scored 11; Newman, Schaub, and Wyse each scored 10.