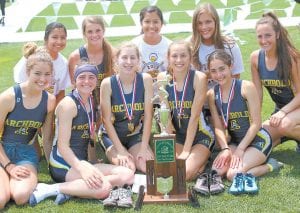 After the 2011 state track & field tournament, AHS first-year head coach Dina Gladieux said, “We have a lot going for the AHS track program, and I am excited to see where it will go from here.”

The AHS girls team finished as runners-up in the team standings at the Division III State Track & Field Championships, Friday and Saturday, May 31-June 1, in Columbus.

The top two teams in each division receive championship and runner-up trophies.

“Words can’t describe it,” said Gladieux as tears of joy filled her eyes.

“My first year, we were one point away with the boys (when Anna finished second with 34 points, while Archbold finished third with 33).

“And that year, we had so many opportunities. We had a hurdler that we thought was gonna win, and right at the finish line, somebody passed him.

“We had a boy in the 200– and that was the first year that they did nine lanes (instead of eight)– and he thought, ok, I just get one point.”

The top eight finishers in each event receive points. First place in each event gets 10 points; second, 8; third, 6; fourth, 5, and so on, down to eighth place, who gets 1 point.

“He didn’t get any because he was ninth. So we missed it (the runner-up team trophy) by one point that year,” said Gladieux.

“And that year haunts me. I guess I blame myself. I didn’t make sure everybody knew there are nine lanes, not eight.

“So this is amazing.”

“Running can suck. It re- ally can, but afterwards it’s all worth it,” said Stamm.

“After you have gotten your PR (personal record), or you run a relay and you’ve run your best time, it’s amazing.

“I know running hurts, but every sport, if you work at it, it’s gonna hurt. You’ve just gotta get through and be positive about everything.

“Positivity is a big part of running. If you’re negative about running you’re gonna hate it.

“Train hard, and definitely take care of your body.

“Something I always do to try and really work on the positivity part of running. On the 4×4, right before I’m about to get the baton, I try and smile and make myself excited, like, this is gonna happen.

“I can’t stop it from happening, so I might as well enjoy it.”

“Don’t underestimate your own ability,” said Gladieux. “If you work hard, and winning is not your goal– your goal is just to work hard– then other things will happen.”

Gladieux had been asked by another reporter at the regional meet if they were focused on winning the regional title, “and I said no. After the league title, I don’t think about team titles,” said Gladieux.

“We focus on just getting as far as we can, and after that, everything else is just a blessing.

“It’s a gift, and that’s what happened today. We were blessed huge, and the girls performed amazingly.”