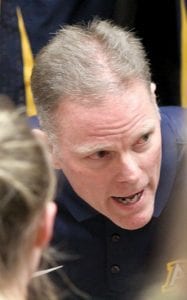 Brian Ziegler, in his tenth season at the helm of the AHS girls basketball team, overtook Char Sharp last week for the most wins all-time in program history. With the wins over Stryker and Wauseon, he now has a career record of 205- 34.– photo by Mary Huber

“We survived a night of poor shooting to get a hardfought win,” said Brian Ziegler, AHS head girls basketball coach, after the Streaks defeated Wauseon 53-50 in overtime, Thursday, Jan. 18, at Wauseon.

The Streaks, ranked sixth in last week’s Division III poll, beat the Indians 79-29 in their first go-around on Dec. 1.

It wasn’t so easy the second time.

Archbold outscored the Indians 7-5 in the fourth to tie the score at 43 and send the game into overtime.

AHS scored 10 points in the extra period to only seven for Wauseon as the Streaks improved to 12-1, 2-0 in the Northwest Ohio Athletic League.

“We did a great job fighting to get the game to overtime and made enough plays to pull out the win,” said Ziegler. “Good teams find a way to win when things aren’t going well, and we did that tonight.”

Kamryn Hostetler led all scorers, with 19 points. Andi Peterson and Lily Krieger each scored 10 to help pace the Streaks.

Archbold won the rebounding battle 25-22, and was led by A. Peterson with eight.

The Indians committed 25 turnovers to 13 for the Streaks.

Sharp finished her career with a 203-87 record.

“This was a nice win,” said Ziegler. “Stryker always competes hard, and coach Brown always has his team ready.

“Our passing was very good tonight. We did a nice job getting Blair Bucklew the ball when she had the hot hand.

“We dealt with some foul trouble, and Gabby Nafziger, Brooke Kohler, and Faith Wyse gave us good minutes.

“Having five players score in double figures shows how unselfish we play. Emie Peterson, Kam Hostetler, and Lily Krieger did a nice job taking what was given to them.”

Bucklew led all scorers, with 19 points, including five of the team’s six three-pointers. E. Peterson scored 13; Hostetler 11; Krieger and A. Peterson, 10 each.

Haley Doehrmann was the only Panther in double figures, with 10.