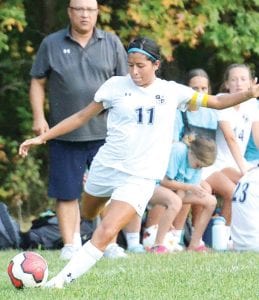 Brittney Ramirez had an assist when Leah McQuade scored her second goal of the game against Liberty Center on a crossing pass from Ramirez.– photo by Mario Gomez

The Streaks play Evergreen (6-7, 2-3 NWOAL) tomorrow, Thursday, while Bryan and Swanton play each other.

“We don’t want to share with anyone,” said Jen Kidder, AHS assistant coach.

“We want this and we want it to be ours. We want it outright.”

The normally slow-starting Streaks got off to a quick start when Leah McQuade blasted a shot past the Tiger goalkeeper just four minutes in for a 1-0 lead that held up throughout the first half.

McQuade scored her second goal midway through the second half on a crossing pass from Brittany Ramirez for a 2-0 lead.

With time running down, the Streaks were guilty of a handball inside of the goal box, resulting in a penalty kick.

The Tigers capitalized on the free kick, scoring just past the outstretched hand of Reagan Kohler to cut the difference to 2-1.

LC tried to capitalize and rushed the Archbold defense, but it was to no avail as time ran out.

“We came out and we played from the beginning of the game until the end,” said Kidder. “Getting that first goal was the momentum we needed to carry us through.”

The Streaks host Evergreen tomorrow, Thursday, and can capture the outright title with a win.

“Our league is so strong,” said Kidder.

“It’s so great to see that competition in our league, and it prepares you for the next step.”