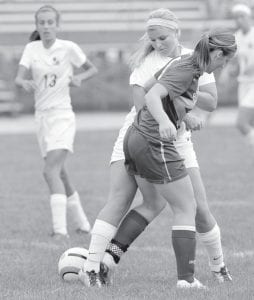 Alexa Coressel and a Bryan player get their heels on the ball, Thursday, Sept. 13.– photo by Mario Gomez

The Archbold girls soccer team raised its record to 3-0 in the Northwest Ohio Athletic League with wins over Wauseon and Swanton last week.

The Streaks lost only their second match this season at Lake to fall to 7-2 overall.

The Streaks traveled to Wauseon, Tuesday, Sept. 18, and came home with a 3-2 victory.

Lauren Kindinger scored Archbold’s first goal on a header off a corner kick with 37:28 left.

Jesse Fidler tied the score with 2:57 remaining, and scored the winning goal with only 1:43 left on the clock.

Cassidy Wyse had two assists, the first on a through pass and the second on a throw-in. Meggie Yoder also had an assist.

The Streaks were back on the road, Thursday, Sept. 20, to Swanton, and scored a 5-1 victory.

Cassidy Wyse finished Archbold’s first-half scoring with a goal and only six seconds on the clock.

Alicia Hernandez finished the Blue Streak scoring with a goal at the 23:31 mark of the second half.

Yoder, Wyse, Hernandez, and Kindinger each had an assist.

The Flyers scored the only goal with 31 minutes left in the second half to take the victory.