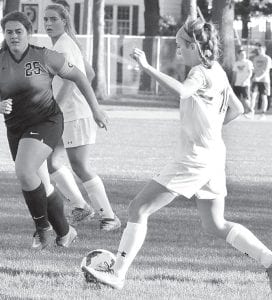 Chloe Nofziger passes off to a teammate in Archbold’s sectional final victory over Cardinal Stritch.– photo by Mario Gomez

The Cardinals squeaked past Delta 2-1 in a second overtime shootout in the sectional semifinals, Monday, Oct. 16, to advance against the Streaks.

It took only 38 seconds for Archbold to get on the board on a Chloe Nofziger goal.

Regan Ramirez and Andi Peterson scored goals within three minutes of each other for a 4-0 lead at the half.

E. Peterson scored two more goals in the second half to record the hat trick.

Kamryn Hostetler added back-to-back goals within a minute of each other, and Ramirez scored her second goal of the game to close out the scoring.

“We’re not ever a team that tries to run up the score on anybody,” said Jen Kidder, AHS assistant coach.

‘We always respect our opponents, but it’s tournament time. We have to be prepared and we have to have our girls prepared.

“Overall I thought they played well. I thought we started out really strong.

“Passing was good and we connected a lot of shots.”

Winners are scheduled to play for the district title, Saturday, Oct. 28, 3 pm, at Genoa.

In 2015, Swanton beat Archbold 4-3 for the district title after regulation, two overtimes, and a shootout. The Bulldogs also defeated the Streaks in the district semifinal in 2012.

Archbold won district championships in 2014 (over Woodmore) and 2011 (over Genoa).