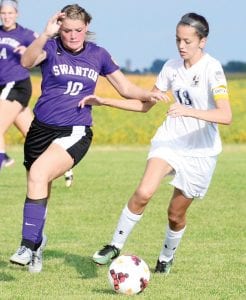 Naomi Rodriguez and a Swanton defender race for control of the ball, Thursday, Sept. 14. The Streaks defeated Wauseon last week to raise their NWOAL record to 3-0.– photo by Mario Gomez

It was a perfect week for the Archbold girls soccer team after notching a pair of victories, including a Northwest Ohio Athletic League victory over Wauseon to stay atop the league standings at 3-0.

Archbold also defeated Woodmore to keep its record unblemished at 9-0.

Since Aug. 21, opponents have scored only one goal against the Streaks.

Emie Peterson scored the knockout goal with 10:33 left, and Dakota Stamm put the stamp on another shutout when she scored with only 2:06 remaining for the 4-0 final.

Chloe Nofziger recorded two assists. Peterson and Ramirez each had one.

Peterson finished the scoring with a goal in the 14th minute for the 4-0 final.

Peterson had a pair of assists while Hostetler and Lily Krieger each had one.