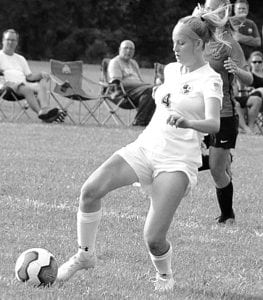 Leah McQuade scored one of Archbold’s seven goals when the Streaks clinched the NWOAL championship with a 7-0 shutout of Evergreen, Thursday, Oct. 10.– photo by Mario Gomez

After a one-year hiatus, Archbold (12-1-3) reclaimed the Northwest Ohio Athletic League girls soccer championship with a dominating 7-0 win over Evergreen, Thursday, Oct. 10, to finish with a 4-0-2 league mark.

“I told (the girls) it would have been easy to write us off with the tie to Bryan and Swanton early in the season,” said Jen Kidder, AHS assistant coach.

“You battled and battled in every single game since then and knocked off who everyone thought was a number one (Liberty Center).

“You guys deserved to be here, and you deserve to make a statement.”

Earlier in the week, the Streaks suffered their first loss of the season when Toledo Central Catholic (7-6-3) scored the game’s only goal with 50 seconds remaining to win 1-0, Monday, Oct. 7, at TCC.

Evergreen (6-8, 2-4 NWOAL) came to battle on the Spengler Field pitch hoping to spoil a chance for the Streaks’ fifth league title.

Regan Ramirez and Leah McQuade each scored a goal in the first half for a 2-0 lead.

Archbold opened the floodgates in the second half with five goals– one from McQuade, two from Kalyn Baker, and one each from Camryn Hudson and Jenna Mahnke.

“Tonight they knew what was on the line,” said Kidder.

“They were fired up from the very beginning.

“That’s how we need to be from this point on… to get far in the tournament.”

It was the final regularseason contest at Spengler Field for seniors Madison Gigax and Chloe Nofziger.

Both four-year letterwinners have played important roles in their four seasons in Blue Streak uniforms.

“When you’ve got two seniors that were such an integral part of the team from day one, obviously there’s that relationship with them,” said Kidder.

“They are just awesome people. Both are tremendous soccer players, but better people even more than that.

“It has been a pleasure to be on the sidelines when they are on the field and playing a little part in the bigger picture that is life.”

The top-seeded Streaks play for a Division III sectional championship, tomorrow, Thursday, at Archbold against yesterday’s semifinal winner between Delta (1-12) and Otsego (0-15).

“You can…’t look past any game,” said Kidder. “We have to come out and play good soccer.

“If you don’t win you’re done and there’s no redeeming yourself at the next game. We have to come out ready to go.”

The winner advances to the district semifinal at Evergreen, Tuesday, Oct. 22, 7 pm.