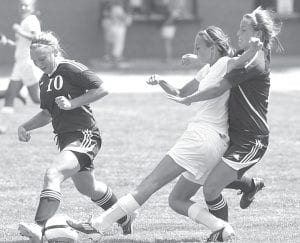 Archbold’s Mim Beck (in white) tries to pass the ball to a teammate, but a pair of Bulldogs cover her from the front and back to try to stop the freshman. The Streaks beat Rossford 7-0, Saturday, Aug. 25 after an earlier 8-0 win at Springfield.– photo by Mary Huber

The defense of the Archbold girls soccer team prevented its opponents from scoring while the offense scored a total of 15 goals in the first two games of the season.

The Streaks traveled to Springfield High School, Thursday, Aug. 23, and came home with an 8-0 victory.

The Streaks were led by Lauren Kindinger, who scored three goals. Alicia Hernandez scored two goals and had two assists.

Ashley Short and Hannah Yoder each had one assist.

Kindinger again scored three goals and Hernandez, two, to lead AHS to victory. Wyse and Mara Beck each scored once. Wyse had two assists, while Meggie Yoder and Hernandez each had one.