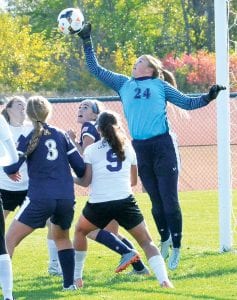 Archbold defeated the Bulldogs 1-0 earlier in the season in an NWOAL contest.

“In our game the other night (against Huron), we didn’t play a very good soccer game. So they wanted to come out here and dominate today, and that’s exactly what they did,” said Jen Kidder, AHS assistant coach.

“They wanted to make a statement and wanted good momentum moving forward in the tournament.”

The Blue Streaks went after the Swanton defense immediately and had many chances to score, but were turned away by Bulldog keeper Amber Torres.

Archbold finally struck the first blow when Andi Peterson knocked a shot past Torres for a 1-0 lead with 9:40 off the clock.

Archbold added to the lead less than three minutes later when Macey Peterson took a pass from big sister Emie and scored.

With 20:05 left in the first half, Kamryn Hostetler scored for a commanding 3-0 lead.

Regan Ramirez and M. Peterson each scored another goal in the first half to go into the break leading 5-0.

Archbold continued to give Swanton’s defense fits in the second half, attacking on the offensive end. E. Peterson added Archbold’s sixth goal with 27:44 to play.

“You can’t take anything for granted at this stage of the game,” said Kidder. “We have to have our team prepared and we have to go out and fight every single game from beginning to end.”

Erica Lutz got Swanton on the board with less than two minutes left, but the Streaks captured their third district title in team history.

Archbold was scheduled to square off against secondranked Doylestown Chippewa (16-0-2) last night, Tuesday, in a regional semifinal at Sandusky.

The winners faces the Liberty Benton (14-3-2)-Coldwater (9-6-2) winner in the regional finals on Saturday, Nov. 4, with a time and site to be determined.