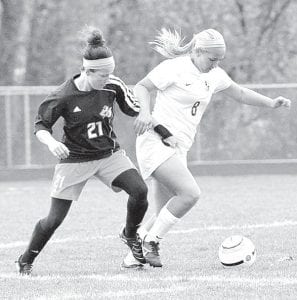 Archbold’s Lauren Stuckey (8) battles an Otsego defender in their sectional final, Thursday, Oct. 18. The Streaks advanced to the district semifinal with a 3-1 victory.– photo by Mario Gomez

The Archbold girls soccer team won its fourth straight sectional championship with a 3-1 victory over Otsego, Thursday, Oct. 18, in a Division III sectional final at Swanton.

Winners are scheduled to play for a district championship, Saturday, Oct. 27, 5 pm, at Lake High School.

In Archbold’s sectional fi- nal, neither team scored in the first half.

Lauren Kindinger scored with 30:36 on the clock in the second half.

Jesse Fidler completed the Blue Streaks’ scoring with goals at the 26:34 and 25:15 marks.

Otsego scored its lone goal late in the second half.

Alicia Hernandez and Cassidy Wyse each had an assist.

“We never expected to be playing in sleet and hail, which made the first half of the game miserable,” said James Kidder, AHS head coach.

Mara Beck (13) gets control of the ball.– photo by Mario Gomez

“But our halftime discussion centered on small, quick passes and finishing the play.

“The girls came out strong in the second half, passing well and working together.

“It was a great win for us, and hopefully the first of many more on the tournament trail.

“Swanton will be a tough game on Tuesday and our girls know how hard they will need to work to come home with the win.”