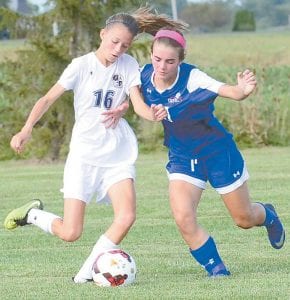 Emie Peterson had a hat trick in the first half, scoring three goals as AHS jumped out to a 6-0 first-half lead.

Dakota Stamm, Andi Peterson and Kamryn Hostetler also had goals in the first half.

In the second half, Lily Krieger scored a pair of goals, and Chloe Nofziger closed out the game with a score for the 9-0 final.

A. Peterson had three assists, while E. Peterson and Nofziger each had two and Regan Ramirez had one.