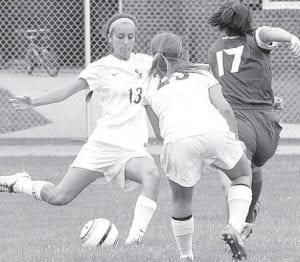 Archbold’s Mara Beck (13) passes the ball to a teammate.– photo by Mario Gomez

The Archbold girls soccer team is 1-0-1 after its first week of the season.

The Streaks opened the season at Springfield, Tuesday, Aug. 19, and came home with a 2-2 tie.

Kamryn Hostetler scored the Streaks’ first goal at the 19:47 mark of the first half.

Alicia Hernandez scored the second with 29:44 on the clock in the second half.

Emie Peterson and Hernandez each had an assist.

Hostetler and Hernandez each scored twice while Neila Kinsman scored once.

Peterson and Jensyn Garrow each had two assists, and Hernandez had one.