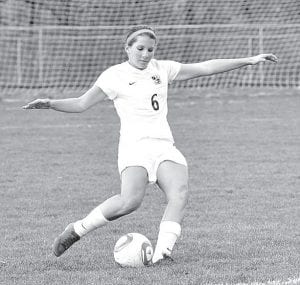 The season ended for the Archbold girls soccer team at the Division III district semifinal, where Swanton defeated the Streaks 3-1, Tuesday, Oct. 23, at Swanton.

Meggie Yoder scored Archbold’s only goal in the first half, and the Streaks led 1-0 at the half.

The Bulldogs (10-7-1) scored three goals in the second half for the victory.

Archbold finished the season with a 14-4 record.

“It is a disappointing way to end the season,” said James Kidder, AHS head coach.

“Our girls played their hearts out and were just unlucky against Swanton. We had the opportunities, but we just couldn’t find the back of the net.

“Regardless of the outcome of the game, I am proud of each and every one of them. Whether they started in every game or didn’t get to see a whole lot of playing time, they worked hard and this team was their number one priority.

“On and off the field, our entire team carried themselves with dignity and class, and never once did I have to be concerned about their sportsmanship or regard for the other teams we faced.

“Our seniors– Amanda Lovejoy, Lauren Kindinger, Kassidy Garrow, and Ella Weaver– were great assets to our team. They will surely be missed next year, but we wish them all the best the rest of this year and as they go off to college. Their futures are bright!”