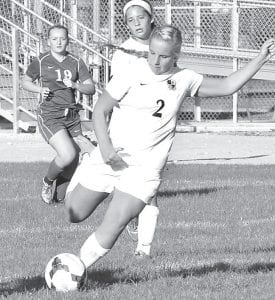 Blue Streak sophomore Emie Peterson passes the ball to a teammate in Archbold’s match with Liberty-Benton.– photo by Mario Gomez

The Archbold girls soccer team returned to action Monday, Sept. 14, in a non-league contest against Liberty-Benton at Spengler Field.

The Streaks were on the short end of a 1-0 decision, dropping their first match of the season and falling to 4-1- 1.

The scoring chances were plentiful for the Streaks, but strong goal-keeping and solid defense helped LB escape Archbold.

The Eagles scored a late first-half goal to take the lead, which held up the rest of the way.

Archbold was on the offensive for the majority of the second half with chances to score the equalizer, but the Eagles’ defense was a brick wall that could not be knocked down. 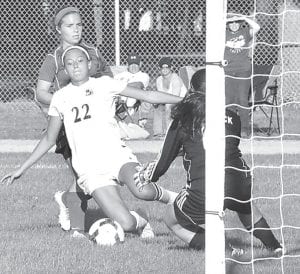 Alicia Hernandez (22) is foiled by the Liberty-Benton goalkeeper in her shot attempt, Monday, Sept. 14.– photo by Mario Gomez

“When they got the lead they did what they had to do to hold onto it.

“They jam-packed six people back on defense and we couldn’t get through.

“We were the better team. We dominated; we maintained possession of the ball. We just couldn’t score.”