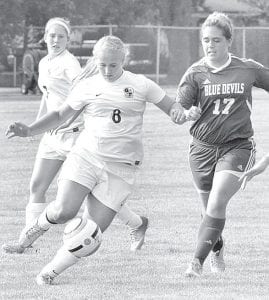 AHS junior Lauren Stuckey (8) passes the ball to a teammate in the Streaks’ game with Springfield.– photo by Mario Gomez

The Archbold girls soccer team defeated Springfield and Ottawa Hills to start the season with a 2-0 record.

The Streaks opened the season at home against the Blue Devils, Tuesday, Aug. 20. Leading 1-0 at the half, AHS scored twice more in the second half for a 3-0 victory.

Jesse Fidler scored the only goal in the first half with 19:47 on the clock.

Korey Arend had an assist.

The Streaks were on the road to Ottawa Hills, Thursday, Aug. 22, and blanked the Green Bears 5-0.

Hernandez had three assists, while Fidler had one.