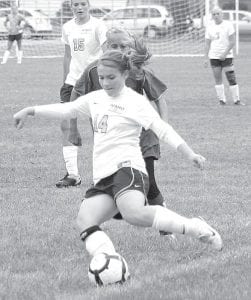 The Streaks took the lead in the first 15 seconds of the game when Alicia Drewes took the ball all the way to the net.

Jesse Fidler took the ball up the side of the field and sent a pass to Sierra Nofziger, who scored to put the Streaks up 2-0.

The Panthers came back to tie the game at 2.

The Panthers tried to keep pushing toward the goal but Ella Weaver, Hannah Leininger, and Megan Arend in goal shut them down.

Mindy Rupp made a run at the goal and passed to Jesse Fidler, who gave AHS a 5-2 lead. Alora Drewes scored her second goal to close the half up 6-2.

The second half of the game the Streaks remained scoreless. The Panthers added one more goal for the 6-3 final.