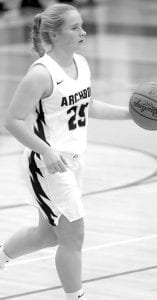 Addison Moyer brings the ball up the court for the Blue Streaks.– photo by Mary Huber

The Streaks improved to 7-3, while Swanton dropped to 4-5.

“I thought we did a nice job playing through foul trouble the first half and received good minutes by girls off the bench.

“Our guards did a nice job shooting, with Gabby Nafziger, Addison Moyer, and Harley Phillips combining for six three-pointers, which opened up the inside for Lily Krieger.

“We did a nice job defensively holding Swanton to 34 points.”

Krieger led AHS with 12 points and seven of the team’s 27 rebounds. Nafziger was also in double figures, with 11 points.

Sophie Hubby keeps her eyes on the action.– photo by Mary Huber