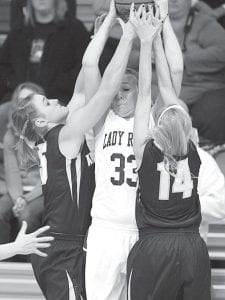 The Archbold girls basketball team suffered its first defeat of the season, 60-56, at the hands of the Bowling Green Bobcats, Monday, Dec. 17, at BGHS.

“We had chances to win despite the huge scoring differential at the free-throw line.”

“We played hard against a good team, and they took advantage of the foul shooting,” said Ziegler.

The game stayed close throughout. Archbold led 16- 15 after the first quarter and 26-25 at halftime.

BG took the lead at the end of three, 42-41, and scored three more points than AHS in the fourth quarter for the four-point victory.

“I thought we rebounded well against a bigger team,” said Ziegler. “Our three-point shooting was a positive, with six threes, so that part of our game is improving.

“We can learn from this loss and make improvements where we were lacking tonight.”

Taylor Coressel and Cassidy Wyse led the Streaks with 14 points each. Jesse Fidler was also in double figures, with 10.

Winter Fricke and Coressel each hit two treys, while Cassidy Williams and Darian Oberlin each hit one.