AHS Girls Improve To 17-1 With Win Over Continental Pirates 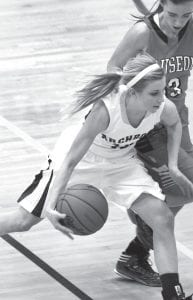 The Archbold girls basketball team, ranked second in Division III by the Associated Press, improved to 17-1 with a 55-35 defeat of Continental, Thursday, Jan. 31, in the Thunderdome.

“This was a solid win tonight against a solid team,” said Brian Ziegler, AHS head coach.

“Cassidy Wyse did a nice job getting us going in the first half and had very good ball movement against their zone (defense).

“Our defensive pressure was very good and took them out of their offensive flow.

“I thought we did a very nice job playing as a team both offensively and defensively. Our balance on the offensive end has been huge all year.

“Our team chemistry continues to grow. We did a much better job at the foul line, also.”

Wyse led all scorers with 15 points. Jesse Fidler was also in double figures, with 12.

No Pirate was in double figures. Vanessa Koppenhofer led the visitors with eight points.