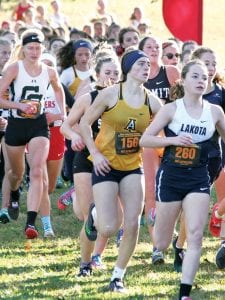 Kylie Sauder (bib 156) stays toward the front of the pack in the Division III girls race at the state cross country championships, Saturday, Nov. 2, in Hebron. Sauder finished 12th.– photo by Lynn Roth

The Streaks finished with 279 points.

Junior Kylie Sauder was the first Blue Streak into the chute. She placed 12th for the second straight year, running the race in 19 minutes, 2.8 seconds. By finishing in the top 20, she made the podium.

She was also named All- Ohio.

“Many early mornings and lots of hard work was put in to get them to the state meet for the third year in a row.

“Four of our ladies, Kylie, Brittney, Karley and Camryn, have experienced the state meet before, so they know what the atmosphere is like and the feeling of the race.

“For our three fresh- men– Sophie, Annika and Alison– it was a whole new experience that they handled very well.

“All seven of these ladies performed to the best of their abilities on Saturday, and that is all we ever ask. Our goal going into the race was to place in the top 10, and we accomplished that!

“We as coaches are so proud of how they have grown as a team and are creating a unique and inviting culture for Archbold cross country.

“All of these ladies will be back next year, and we have four to five others that will continue to add to our team. That makes us coaches excited for what is ahead!”