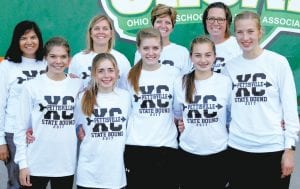 (A version of this article was posted on www.ArchboldBuckeye.com on Saturday, Nov. 4.)

The Archbold girls cross country team made the most of its first-ever appearance in the state meet.

Minster once again easily ran away from the pack to win its 11th state title.

Its first five runners all finished in the top 22 as the Wildcats finished with 34 points.

Mount Gilead placed second with 131, and McDonald was third with 138.

The Streaks were fifth with 183, and Pettisville was sixth with 191.

Kylie Sauder was the first Blue Streak into the chute. She placed 32nd in 19:51.

“We talked all week long on what they should expect, and I tried to prepare them for that kind of race.

“They put themselves in great positions early on and continued to move forward. They executed everything very well and it paid off with a huge fifth-place team finish!

“I am so proud of them and all they have accomplished this season. Many firsts!

“Probably one of the biggest accomplishments from Saturday was a huge personal record from our senior, Lizzy Schmucker. She went out with a bang– I’m so happy for her.

“These girls got great experience this weekend that we can build on for the next few years to come.

“I’m thankful for the opportunity to coach them.”

Elizabeth Sauder was the first Blackbird to finish, placing seventh in 19:11.

“Our girls ran another tremendous race,” said Tom Wagner, PHS head coach. “I couldn’t be prouder of them.

“Elizabeth Sauder led the way with a seventh place finish and made ‘All-Ohio.’ Nichole also made ‘All-Ohio.’ Kate Stuber ran a very solid race, with Kelly Miller right behind her. Sarah Foor ran another personal record.

“This was the first time down to state for both boys,” said Wagner. “Max Leppelmeier, as a freshman, ran a very solid race. Logan Rufenacht also ran well.

“This experience, for both boys, will be invaluable to them for next year.”