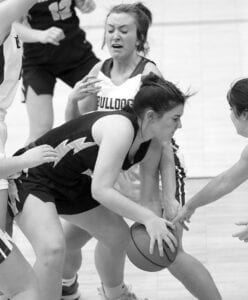 Addi Ziegler drives to the basket and is fouled by Swanton’s Katie Floyd at the end of the first quarter of their Div. III sectional final.– photo by Mary Huber

A three-pointer by Addi Ziegler less than two minutes into Archbold’s Division III sectional final with Swanton gave the Streaks their first lead of the night, and a Harley Phillips bucket after a steal with 1:56 left in the first quarter gave AHS its last lead of the night.

“(Swanton) shot well, especially the first half, (and) got the lead.

“Then they started taking time off (the clock), and with the guard play that they have we just couldn’t chase them and ran out of gas, and they did a nice job not turning it over.

“We had too many turnovers.

“They’re a good ball club, and they deserved to win tonight to move on. We just didn’t play well enough to do that.”

The Streaks (11-11) held the Bulldogs scoreless for 4 1/2 minutes in the third period, but couldn’t take advantage.

“We’ve had stretches like that throughout the year,” said Ziegler.

“We’ve played well defensively all year long and just haven’t gone on stretches where we just didn’t score. You can’t do that in a tournament game and expect to win.

“We’ve just got to get better offensively.

“We had a stretch there at the end of the year where we played five games in eight days, and it was very tough on us. It was very grueling, and we ran out of gas.

“I thought we just didn’t have the energy we had against Wauseon (in the semifinals) tonight. I just think the long season kind of wore on us.”

Aricka Lutz led Swanton, with 17. Averie Lutz was also in double figures, with 11.

“It’s a tough locker room right now, losing three seniors, ones that have been with you for four years, and then in the junior high as well,” said Ziegler.

“Obviously with Kylie (Sauder)– she doesn’t come off the court very often.

“It’s gonna be tough replacing her. You don’t replace somebody like Kylie that plays so hard and is very athletic.

“She’ll be tough for us to fill, but someone will have to take it and do it.

“Delaney (Garrow) gives 110% every night out, every day in practice. She’s one of our better defensive players.

“We never have to question her heart or her ability to play. She has started, she’s come off the bench; she just fills a role whatever is asked of her.

“As coaches we can’t expect any more.

“Kiera (Gensler) is a tough one,” said Ziegler as he became more emotional.

“Kiera was a great teammate, and it’s tough for someone like Kiera to not see very much playing time.

“But she’s there every day in practice, making everyone else better, and just putting in the hard work. We just mentioned that in the locker room, that I hope it didn’t go unnoticed, because the coaching staff did not go unnoticed of her efforts, running the scout team every night, getting us better.

“She’s up on the bench, she’s not sulking, and that will take her a long way in life– that she handled her position and her role on the team like she did. I can’t give her enough credit.”