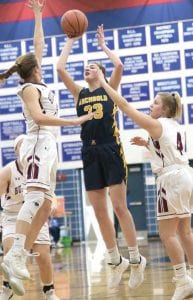 The Bulldogs came back from a 15-4 first-quarter deficit to beat the Streaks in overtime, 58-54, to win the sectional title, Saturday, Feb. 23.

“It’s a tough way to end the season and for our seniors to end their careers,” said Brian Ziegler, AHS head coach.

“We shot poorly from the free-throw line the entire game, especially in the fourth quarter. It hurt converting only five of 13 foul shots to close out the game.

“Rossford made plays when it counted.”

“I thought we did a nice job defensively to get the job done,” said Ziegler. “When we weren’t making shots early, our defense carried us. We did a good job moving the ball versus LC’s zone defense, but shots just didn’t fall.

Gabby Nafziger drives the baseline to put up a shot against Rossford.– photo by Mary Huber

The Streaks (14-8) sprinted out to a 13-0 lead before Sammi Mikonowicz finally scored for the Bulldogs with 2:13 left in the first period.

The Rossford junior hit back-to-back buckets, but Addison Moyer hit Archbold’s final basket of the first quarter for a 15-4 lead.

Archbold led 19-9 with three minutes gone in the second when Mikonowicz and Megan Dunne led the comeback for the Bulldogs to come within four, 23-19, at the half.

Lily Krieger hit a pair at the foul line and Moyer hit a three within the first minute of the second half to put AHS back up by seven, 28-21.

Naomi Rodriguez scored on back-to-back baskets to extend the difference back to seven, 34-27, before Dunne got a steal and layup to get Rossford back to a five-point difference.

Neither team scored in the final 2:32 of the third, and AHS went into the final eight minutes leading 34-29.

Mikonowicz and Dunne got Rossford within one, 34- 33, when Hadley Galvan hit back-to-back buckets to put the Streaks up 38-33.

A deuce by Mikonowicz and a three from Dunne tied the score at 38 with 4:49 left in regulation.

A bucket by Andi Peterson and two free throws by Moyer put Archbold up by four, 42- 38. Kylie Sauder went to the foul line twice, making one of two each time, to put AHS up 44-38 with 49 seconds left.

Dunne was fouled on a three-point shot and made a four-point play with the free throw to pull Rossford within two, 44-42.

After Moyer made one of two at the foul line with 6.9 seconds remaining, Dunne hit a three at the buzzer to tie the score at 45, sending the game into overtime.

Rossford took its first lead of the game in the extra period as the Bulldogs went on a 9-0 run to go up 54-45.

Nafziger finally hit a three to score Archbold’s first points of OT with 49 seconds left, but Rossford (14-6) was 11-14 at the foul line in the OT to secure the win.

“It was a physical game. I thought Rossford did a better job playing through that,” said Ziegler.

“In the fourth quarter when you get fouled you need to step to the line confident. We let too many foul shots go missed, and then we didn’t execute defensively.

“I think they played more to win while and we were just trying to survive.”

Mikonowicz and Dunne accounted for 52 of Rossford’s 58 points.

It was the final game in a Blue Streak uniform for four seniors: Nafziger, Peterson, Krieger, and Faith Wyse.

“It’s always tough. This is a hard day to swallow,” said Ziegler.

“It’s tough to see your four seniors go. We’ve got some seniors that have played on some pretty good teams that made some good long tournament runs. It just wasn’t meant to be this year for us.”