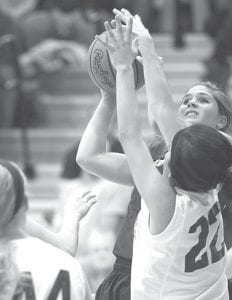 The Streaks led 16-4 after one on their way to a 15- point victory over Ayersville (3-2) in the semifinals.

“We did a nice job setting the tone early in the first quarter,” said Ziegler.

“We did a nice job with our defense and didn’t allow them to get any kind of flow offensively.

“We didn’t shoot as well as we are capable of, but good teams can find ways to win when they don’t shoot well. Our bench played well, as we had to deal with foul trouble. Hannah Hesterman, Cassidy Wyse, and Jesse Fidler did a nice job offensively.”

The win propelled the Streaks into the Tuesday fi- nals against Tinora. The Rams (3-3) beat Defiance in their semifinal matchup, 42-25.

In a foul-plagued first half, Archbold led 14-8 after one and 26-17 at the half. Both teams had six team fouls with less than two minutes left in the first quarter, and eight of the Streaks’ firstquarter points were on free throws.

The Streaks were called for their sixth team foul with 4:52 left, while Tinora had only one. That hurt the Rams in the end as they were forced to foul to try to get the ball back.

Tinora, who didn’t lead all night, tied the score at 41 on a three-pointer by Breanna Hughes with 4:06 remaining.

Wyse regained the lead for AHS on a turnaround jumper, and Cassidy Williams converted on a traditional three to pad the difference to 46-41.

Erica Smay hit the front end of a one-and-one for Tinora. Fidler hit a basket off a fast break with 3:04 left, and the Streaks led 48-42.

Wyse scored Archbold’s fi- nal basket, and Smay hit a trey as time ran out for the 50-45 final.

“It was a nice win against a good Tinora team,” said Ziegler. “We haven’t been in this situation with a close game this year. I thought our team responded well when things got close.

“We again had to play through some foul trouble, and our bench played some huge minutes. Taylor Coressel did a nice job both offensively and defensively, and we were able to get Cassidy Wyse the ball where she could score.

“Tinora battled and hit big shots, but we responded well.”

Wyse, voted the tournament’s Most Valuable Player for the second straight year, and Hughes, also on the all-tournament team, shared scoring honors with 21 points each.