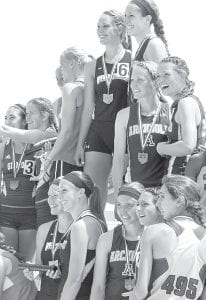 Timia Easley from Columbus International won with a jump of 18-1. 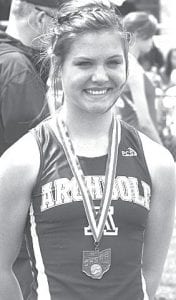 In Div. II, Archbold’s Levi Wyse, a sophomore, did not qualify for the finals in the boys 400. His time placed him 13th among the 16 runners.

“I was very pleased with the performances of the AHS athletes,” said Dina Gladieux, AHS head coach.

“It was a goal stemming from last year to make it down to the state meet this year.

“They worked very hard throughout the year to that end. 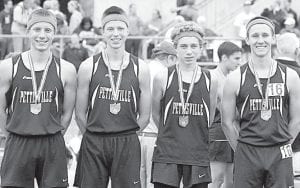 “Our distance team was like a family to each other, not wanting to let each other down and spending extra time as a team together.

“They had two goals going into the state meet. The first was to make the award stand and the second was to break the school record.

“Well, we didn’t run our fastest time of the year, but we did put forth our best effort of the year and made the stand.

“When you’re running in the kind of crowd the kids were in, it’s tough to stay out of traffic. One or two of our kids were running in lane two most of their 800 leg.

“We ran with heart, and I couldn’t be prouder of any group of kids.”