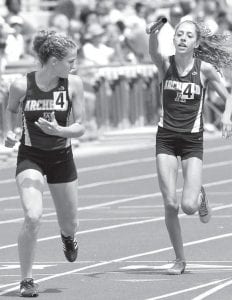 Emily Roth waits for the handoff of the baton from Julia Lambert in the 4×400.– photo by Mary Huber

“Our goal for state was to get third or higher on the podium,” said Roth. “We were certainly hoping for first and were pushing as hard as we could to get it, but we’re really happy with ‘2’ as well.”

“We were just looking to run under a four-minute (time),” said Lambert. “That’s what we’ve been trying to do all season.

“We dropped so much time every meet that we’ve ran, and we were just happy that we got under the four minutes here.”

With the school record of 3:56, “we were actually trying to get a school record. It was super close, but not quite,” said Roth.

With two juniors (Roth and Lambert) and two freshmen (Riley and Stamm) back next year, “We’re looking forward to having all our girls back again and able to run the 4×400 again next year,” said Roth, while Lambert added, “definitely get the school record next year.”

“It means a lot, coming from getting eighth last year to third this year,” said the AHS junior, who was the only Archbold athlete in the boys meet.

“It’s just a great accomplishment for me and what we could do for the team.

Jack Fisher races to the finish in the boys 400.– photo by Dennis Driver

“I had the support of my team the whole time we were down here, so it was really nice to have them along with me for the ride.

“I felt really good this race. I got out fast, didn’t see anyone until the last 100 (meters), and then they started kicking it in.

Fisher’s best time this year had been in the Friday qualifier when he ran in 49.95.

“So I knocked off another four-tenths of a second,” he said. “That was my goal, so my goals are met for this year, and then one more year ahead of me.”

His goal next year?

“State champ,” he said with a smile.

Stamm, a freshman, placed fourth in the girls 400 after running the race in 58 seconds flat.

Then she broke the record again in the state finals.

“I’m excited,” said Stamm. “I ran against a great group of girls. It was so much fun!

“It was rough at the beginning, but it always is, and then the end– it’s just so much fun to finish.

Looking to next year, Stamm is looking forward to “improving my time and relays. I’m super excited for the relays.”

The Birds set their fourth school record of the year, finishing in 9:37.15.

Louisville St. Thomas Aquinas, which has three sisters on its 4×800 relay, defended its title, setting a Div. III and state meet record of 9:05.84.

Morgan Leppelmeier runs the third leg of the 4×800.– photo by Dennis Driver

The Birds’ goal at the state tournament was to make the podium.

They felt “good, really good,” said A. Leppelmeier. We were ranked seventh (and) got fifth, so that was very impressive for us.”

Their strategy was to “go with everyone around us, because we haven’t been pushed all year,” said the junior.

“This gave us a lot of experience, since we’ll have the same team next year.”

Sauder and Foor are sophomores, while sister Morgan is a freshman.

Other Archbold and Pettisville state competitors who did not make the finals or the podium:

Left: Lexa Richardson runs in the semifinals of the 100-meter hurdles. Right: Sydney Ranzau makes an attempt in the pole vault.– photos by Mary Huber and Dennis Driver

Archbold finished 16th with 13 points, while Pettisville was 45th with four.

“I was thrilled with the performance that the kids did at the state meet,” said Dina Gladieux, AHS head coach.

“Throughout the season we have focused on one word… perseverance. These kids have persevered through each of their workouts, and it showed at the state meet by the way they performed.”

“I couldn’t be prouder of any group of athletes,” said Tom Wagner, PHS head coach.

“We knew coming into the Jesse Owens Stadium that we would be facing perhaps the best-ever in the history of Div. III in terms of distance teams.

“St. Thomas had broken their own state record at regionals the previous week. Minster is always tough, no matter what the year.

“In the 4×800, our girls ran with a great deal of heart. Their goal going in was to make the podium this year and to break our school record, again. They accomplished both goals.

“All year we had not been really pushed. We have enjoyed clean handoffs without having to fight for space in the handoff zone. We’ve enjoyed being able to run in Lane 1.

“Going into the state meet, we knew that was going to change with the intense competition. We found ourselves fighting for that space and often running in Lane 2… or 3. We still took three seconds off our time, which is just outstanding.

Elizabeth Sauder runs in the 800.– photo by Dennis Driver

“As Elizabeth gains in confidence and experience, she will be able to go out a little stronger at the start.

“We have everyone back from this distance team for next year, and we know that this experience at the state level is going to be invaluable for 2017.”