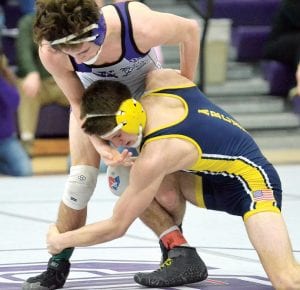 Archbold wrestlers found the going rough when they traveled to Swanton to battle the Bulldogs and Wauseon in Northwest Ohio Athletic League action, Thursday, Feb. 8.

The Streaks lost to Swanton 31-18 and took a 58-9 thumping from Wauseon to finish the league schedule 5-3.

The NWOAL tournament is Saturday, Feb. 17, at Swanton.

Swanton and Wauseon both qualified for the state duals tournament in Columbus last weekend. The Indians won the dual team title in Division II.

The Bulldogs fell in the Div. III semifinals.

Gibson Burkholder lost by a fall to Crew Oberheim at 195 lbs., giving the the lead back to the Bulldogs, 10-6. 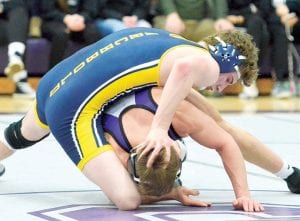 Anthony Gonzalez lost a 7-0 decision to Swanton’s Tommy Lytle, increasing the difference to 13-9.

Gavin Grime (145 lbs.) won the final Blue Streak match of the night with a 6-0 decision over Gage Pachlhofer.

The Indians used their contest against Archbold as a warm-up before their trip to the state duals tournament in Columbus.

The Streaks managed only two victories.

Gonzalez scored a 58-second fall over Jaden Bannister at 285 lbs. and Grime was a 4-1 winner over Mauricio Barajas at 145 lbs.