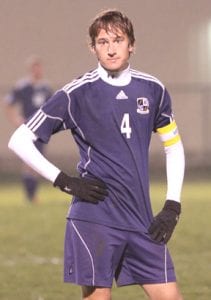 David Bontrager looks on in disbelief as the clock ticks down on Archbold’s undefeated season.-photo by Mary Huber

Archbold took a 1-0 lead in the first half when Brodie Nofziger scored what turned out to be the Streaks’ only goal with 17:28 on the clock.

The Green Bears came back and tied the score at 1 with 3:38 left in the first half.

Ottawa Hills scored what turned out to be the winning goal on a penalty kick with 11:01 left in the second half.