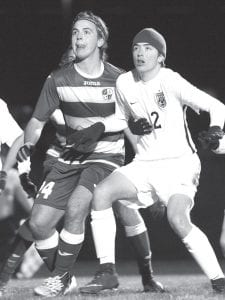 Archbold’s Lucas Yoder (24) and Ottawa Hills’ Scott Davis line up for a direct kick in the Div. III district boys soccer final, Saturday, Oct. 28. The Green Bears squeaked by the Blue Streaks 2-1 for the second time this season.– photo by Mary Huber

Archbold was looking to capture a Division III district boys soccer championship and exact some revenge against Ottawa Hills, Saturday, Oct. 28, at Rossford.

The Green Bears defeated AHS 2-1 during the regular season on Aug. 28.

But the outcome was a carbon copy of the first meeting, as the Green Bears (17- 0-2) captured the district title with another 2-1 victory and exacted a little revenge of their own after losing the district championships to Archbold the past two years.

“That’s a really good team over there. I wish them the best of luck,” said Sean Stewart, AHS head coach.

“Games like this– when you’ve got two really good teams– it comes down to the little moments.

“It hurts right now, but I’m proud of the guys.”

Ottawa Hills put pressure on Archbold to start the contest when Ignacio Garcia- Mata put the Bears on the board with a goal for a 1-0 lead with 22:48 left in the first half.

Chase Kohler uses his head to pass the ball against the Green Bears.– photo by Mario Gomez

At the 11-minute mark, Green Bear Donovan Bridges suffered a knee injury and had to be transported to the hospital via ambulance, causing the game to be delayed for more than 30 minutes.

Tammy Talmage, Ottawa Hills athletic director, said in an email on Sunday, the X-rays were “all clear with no fracture, but (Bridges) will be on crutches for two weeks.”

After the game resumed, Kevin Hileman scored the second goal for Ottawa Hills with 10:38 on the clock for a 2-0 lead.

“We probably should have had at least one in the first half,” said Stewart. “For some reason it just seemed like we’d get a couple chances, but just couldn’t put them away.

“We talked about trying to punch them early. It just didn’t work out.”

Archbold played with more intensity in the second half, but couldn’t put the all-important first goal on the board.

With 8:11 remaining, Green Bear keeper Tommy Coil was guilty of a handball just outside of the goalie box, and an indirect kick was awarded.

Josh Kidder stepped back and blasted a shot that cleared Coil and gave Archbold the goal it needed, cutting the difference to 2-1.

As time was running down, the Streaks had one more chance when a crossing pass was headed by Kaiden Bedsole, only to be cleared by a Green Bear with a header of his own.

“It looked to me, and I don’t have the best angle, like we had the ball in the net and it was cleared out from inside the goal,” said Stewart.

“But if we take our chances earlier in the game then it doesn’t matter, so it is what it is.”

The Streaks finished the season with a 16-2-1 record.

“To come back in the second half, especially in those last 15-20 minutes, and put the effort in that they put in– I’m just really proud of the guys,” said Stewart.”

“I thought we fought well and came back well.”