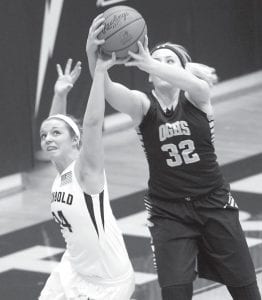 Archbold’s Cassi Wyse, left, knocks the ball out of the hands of OG’s Kylie White in the third quarter of the battle of the two state-ranked teams, Tuesday, Feb. 9. The Titans prevailed 60- 52.– photo by Mary Huber

Down 37-24 at the half, Archbold came back to tie the score at 48 with 3:17 remaining before ultimately falling to Ottawa-Glandorf 60-52 in a battle of two top- 10 girls basketball teams, Tuesday, Feb. 9, at the Thunderdome.

Archbold (18-3), ranked seventh in Division III by the Associated Press, had no answer for OG’s Kylie White, who finished with a game-high 28 points and seemed to constantly be at the right place at the right time– usually right under the basket.

“We didn’t get the win, but I liked how we fought,” said Brian Ziegler, AHS head coach.

“We were down double figures a couple times and showed good character fighting back, and tied the score at 48. We just couldn’t get over the hump and get the lead.

“Give OG credit. They are a very good team and made the plays to win.

“Even though we lost, this should give us come confidence heading into the tournament.”

It was the final game of the regular season and the final home game for Blue Streak seniors Brooke Hines, Neila Kinsman, Shelby Cline, and Cassi Wyse, as the team celebrated Senior Night. 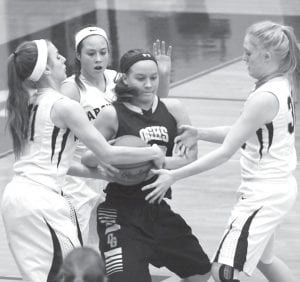 Alyssa Ziegler and OG’s Mackenzie Meyer fight for possession of the ball. Also in on the play are Kamryn Hostetler and Morgan Miller.– photo by Mary Huber

The Titans (19-2, ranked sixth in Division II) sprinted out to a 14-2 lead less than five minutes into the game. Archbold’s two points were free throws by Kamryn Hostetler, who finished as the Blue Streaks’ leading scorer, with 14 points.

Alyssa Ziegler started the run with a three-pointer. OG’s Devon Warnecke answered with a three of her own.

Peterson ended the first quarter scoring with a deuce.

Peterson opened the second quarter with a basket to get AHS within two, 18-16.

That was the closest AHS got until there were four minutes left in the game, as the Titans led 37-24 at the half and 48-37 after three.

The Streaks went on a 11- 0 run to open the fourth to tie the score at 48 with 3:17 remaining. Morgan Miller opened the fourth with a traditional three-pointer. A basket by Wyse, followed by a Miller put-back closed the gap to 48-44, and a Wyse bucket cut it to two.

Two free throws by Hostetler tied the game at 48 and sent the Blue Streak fans into a frenzy, but AHS was never able to take the lead.

With her teammates constantly finding her under the basket, White scored three straight baskets to put OG up 56-48, as the Titans rolled to victory.

Besides Hostetler, Wyse also finished in double figures, with 10 points.

The Titans forced the Streaks into committing 25 turnovers, while committing only 11.