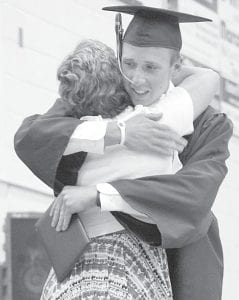 Janet Wyse, a member of the Archbold Area School Board, embraces her son Stuart after handing him his AHS diploma during commencement exercises, Sunday, May 26.– photo by David Pugh

The Archbold High School Class of 2013 is exceptional.

Just ask Bryce Tinsman, a member of the class.

In his speech during AHS commencement exercises, Sunday, May 26, he said the combined record of the school sports teams was 147- 23 during 2013-14. Archbold teams captured over half the Northwest Ohio Athletic League titles, and had a 54-7 record against league opponents.

The boys soccer team advanced to the regional semifinals, setting a goal for future teams.

Girls basketball was one game away from a trip to state.

Boys track won the league for the fifth year in a row.

“If that’s not exceptional, I don’t know what is,” Tinsman said.

“That’s the definition of excellence,” he said. 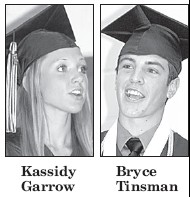 The Class of 2013 was anything but ordinary academically, Tinsman said.

“Our class excelled in the classroom, posting an average grade point average of 3.12. That means the average student had better than a B average all four years.

The class combined to earn more than $1.6 million in college scholarships.

“This kind of success is no accident. It takes motivation. It takes hard work. It takes dedication.

“But even more than that, it takes teamwork. The success of our class is due, in large part, to our ability to work together, to have fun, and to push one another not to be good, but to be exceptional,” Tinsman said.

“The remarkable support we show each other– this is what truly sets us apart from the rest,” she said.

Garrow said, “Educators, administrators, and coaches nurtured and challenged us, to prepare us for the world outside these walls.

“To be raised in such a positive community that believes in a strong education, Christian values, pride in athletes and performers, and always doing our best, has paved the future pathway to success, for today, and tomorrow,” she said.

Two members of the Class of 2013, Joshua W. Stanford and Anthony McCoy Jr., died in separate accidents about 48 hours apart, on April 4 and April 6, 2012, respectively.

Garrow said the two “live on through us, in our memories. They remind us to make every day count.”

Tinsman remembered nine-year-old Maddie Lambert, who died of cancer. Lambert was an inspiration to himself and others.

He said he considered her an honorary member of the Class of 2013.

He told stories that illus- trated the high character of the Class of 2013.

He said he was approached by officials of a tournament held at Toledo Central Catholic High School.

Tournament officials told him they had never seen a group cheer with such class. When the Archbold students got up to leave, several seniors could be seen picking up trash, rather than leaving it behind.

“That so impressed them, they made a point of coming up to me and saying something,” he said.

That, he said, was a sign of character, “and ladies and gentlemen, you have an unbelievable amount of character.”