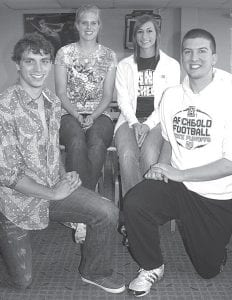 The Archbold High School Class of 2010 was a class of firsts: the first class that, as kindergarteners, attended the Archbold Elementary School; the first to complete all four years of high school under principal Tim Meister; and possibly the first to destroy a computer. These seniors discuss those topics, and many others. From left: Nate Hammersmith, Autumn Lantz, Karly Short, and Robert Addington.– photo by David Pugh

A few years ago, a portable cellular phone was an expensive, bulky thing that came in a bag.

Today, a high school senior can conceal a modern phone inside the hood of a sweatshirt (“hoodie”) in class, and talk to someone in another school miles away.

But modern technology might lead to too much information.

“Sometimes you hear things, and you say, ‘You can keep that to yourself. I don’t need to know that one,’” Autumn Lantz said.

Lantz was joined by fellow Archbold High School seniors Karly Short, Robert Addington, and Nathaniel “Nate” Hammersmith, to talk about the Class of 2010.

And a talkative group it is.

“I’ve walked into class, and it was one student, and one teacher, and the student was calling someone. The teacher didn’t realize it. Who do you think he’s talking to? Himself?” Lantz said.

Text messaging allows cell phone users to send brief messages (usually less than 130 to 150 words) to other phones or the Internet.

“Some people still text from their pockets. I was in class last period where I had two guys right behind me texting while the teacher was talking,” Hammersmith said.

“I love it when you can hear the clicking,” Short said.

“It almost came out of our class. We call it “’Facebook official,’” Hammersmith said.

If one person asks another on a date, and the couple begins dating, it’s not considered official until they post it on Facebook, he said.

“If they break up, it’s not official until it’s on Facebook,” Hammersmith said.

“So people have Facebook with them all the time. They change their status in class. ‘In chemistry, bored. In math, bored,’” Lantz said.

Hammersmith, who doesn’t use Facebook “a lot,” said it offers privacy settings to prevent just anyone from looking.

The Class of 2010 is a class of firsts. They started their education as kindergarteners at the Elmira School, but midyear, moved into the new Archbold Elementary School on Lafayette Street.

Plus, when they were freshmen, the new football stadium opened.

They were the first class to take a lot of new state profi- ciency tests.

They may also be the first class to destroy a $1,000 computer.

The seniors said one of the senior boys was sitting in an office chair, with wheels on the bottom. When their teacher told the class to back away from the computers, the boy pushed himself away from the desk with the computer on it, and, “The computer goes tumbling back (onto the floor), and shatters,” Addington said.

“The funny thing was,” said Lantz, “Mr. (Brent) Gnagey (technology director) had just been talking maybe a week before about there was no possible way those computers would ever fall off.

“There was nothing you could do (to damage a computer) unless you literally picked it up and threw it on the ground. Then, like a week later, the computer fell off the desk, without being touched.”

The Class of 2010 has the dubious distinction of graduating into what some call the worst economic climate since the Great Depression.

“Thanks for reminding me,” Addington said.

“It’s a good time to be in school,” Lantz said. “We’re going to be graduating, but we’ll be going to college, most of us, and we’ll have four years for it to turn around for us.”

Hammersmith said those who aren’t going to college already arranged jobs for their future.

“I know a lot of people going into nursing, and that’s a pretty stable field, so those friends of mine aren’t too worried,” Short said.

“I know a lot of people going into medical fields, mainly because of the job market,” Lantz said.

“A few guys are going into the military,” Addington said. He said many of those boys will use money from the military to pay for college.

The four seniors said members of their class will have some outstanding success stories.

Short said one of her classmates will “go on and do amazing things for the technology world, like invent software. He can do anything with computers.”

“There are certain people who can sit down and write poetry that blows your mind. There are definitely creative writers, and awesome artists,” Lantz said.

“Everyone has a chance to be extremely successful,” she said.

The seniors said decisions about their future put them under pressure.

“You’re deciding how the rest of your life is going to play out,” Hammersmith said.

“Actually, the hardest part was deciding where I wanted to go. Now that I’ve made that decision everything seems more relaxed,” Short said.

But with all the pressure of big decisions and a bad economy, Addington said he would tell Archbold, “Don’t worry about us.”

“We work hard, and we’re driven, so we will succeed, whatever we do,” Short said.