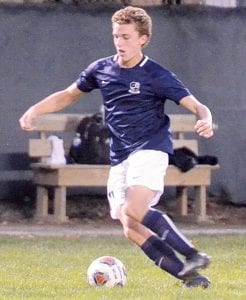 Trey Theobald had a pair of assists in Archbold’s win over Liberty Center and one assist in the Streaks’ win over Continental last week.– photo by Mario Gomez

The Archbold boys soccer team won a pair of home games last week before going on the road and suffering their fourth defeat of the season.

Bryan sits at 3-0-2 with one league game remaining for each team. The Streaks were scheduled to play Evergreen yesterday, Tuesday, while Bryan played Swanton.

“We talked before the game about being in the driver’s seat for the league as long as we take care of business,” said Sean Stewart, AHS head coach.

“It’s crunch time. We have to start playing our best soccer.

“We opened the season with some tough games. We were a team in a little bit of a transition after losing some key players.

“It’s more about how we’re playing at the end of the year than the beginning of the year.” 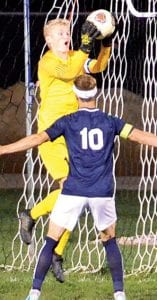 Goalkeeper Noah Cheney gets a save against Liberty Center, Thursday, Oct. 3.– photo by Mario Gomez

It was an aggressive first half for AHS with an unproductive outcome.

Archbold exploded for four goals in the second half and shut out the Tigers.

“I thought we moved the ball well and created a bunch of chances,” said Stewart.

“We obviously had some real problems finishing in the first half. We have to do a better job of putting the ball in the back of the net.”

Archbold allowed just one shot on goal, which Cheney halted.

Trey Theobald had a pair of assists while Hagans had one.

Archbold recognized its seniors, Tuesday, Oct. 1 against the Pirates (7-5-1) for a non-league contest.

Zimmerman scored twice to open the second half. Magallanes joined in on the fun, scoring the final goal.

Witte, Theobald, Hagans and Zimmerman each had an assist.

An early-morning bus trip to Van Buren was on the docket, Saturday, Oct. 5.

The Black Knights (12-1-1, tied for 15th in Division III in the Ohio High School Scholastic Soccer Coaches Association poll) did all their scoring in the first half after 30 minutes of scoreless soccer.

Hunter Stone scored the first goal with 9:18 on the clock, and assisted on the second goal by Wyatt Atchison.