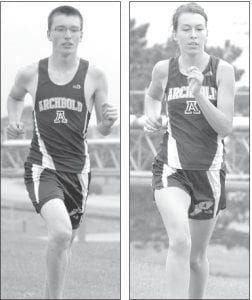 Tyson Helmke, left, finished 30th in the boys race while Ellie Sonnenberg, right, was 19th in the girls race at the NWOAL cross country championships, Saturday, Oct. 13. Photos are from earlier this season.– photos by Mario Gomez

The Golden Bears won the boys title with 57 team points. Delta was second with 63, and Archbold was third with 69.

The Tigers swept five of the top seven places to finish with 20 points in the girls race. Wauseon was second with 35, and Bryan was third with 70. Archbold had 103 to finish fourth.

Tressa Parsley was Archbold’s first runner to finish. She placed 18th in 21:51.

The girls run in the District 2 race at 4 p.m. The top four teams and any individual who finishes in the top 16 advance to the regional meet in Tiffin, Saturday, Oct. 27.

The boys run in the District 3 race at 2:30 p.m. The top four teams, along with any individual who finishes in the top 16, advance to the regional meet at Youngstown, Saturday, Oct. 27.