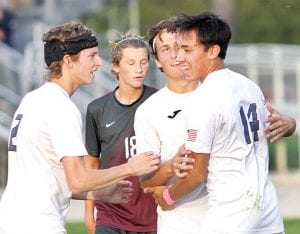 Josh Kidder (14) gets congratulations from Luke McQuade (2) and Connor Hagans after scoring his second goal against Genoa.– photo by Mary Huber

Josh Kidder scored three goals for a hat trick to lead Archbold to its sixth sectional boys soccer title in eight years in a 6-0 defeat of Genoa (8-10-0) at Spengler Field, Saturday, Oct. 21.

“The whole team played team defense, so that first 10-15 minutes was a good job of making sure that Genoa’s energy didn’t create a goal.

“From there, we were able to control things on the ground and play our game.”

Kidder scored the only two goals of the first half in a physical contest with the Comets, who advanced to the Division III sectional final after defeating Emmanuel Christian 12-0 in their sectional semifinal.

“We’re a team that has had some success for the last few years, so they were going to be physical, and that’s all right.

“That’s part of soccer, so we’ve got to play through it,” said Stewart. 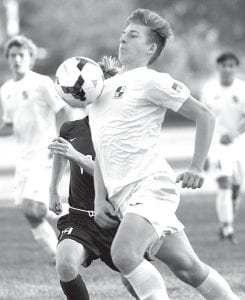 Elijah Zimmerman traps the ball with his chest in Archbold’s sectional final against Genoa.– photo by Mary Huber

Andrew Hogrefe added the third goal 3:16 in the start of the second half.

Kidder scored his third goal on a penalty kick, and Clay Gerig took a pass from Kaiden Bedsole to give AHS a 5-0 lead.

Archbold benefited from a Genoa own goal for the 6-0 final.

The Streaks had 19 shots on goal to one for the Comets.

“I didn’t want us to start slow, but I was certainly aware that it was a possibility,” said Stewart.

“We’ve been off for a week and a half, and they (Genoa) were coming off a big win a couple days ago, so I kind of expected them to come out flying.

“We just had to weather that storm.”

Neither Archbold nor Pettisville played MVCD in the regular season.

Archbold and Ottawa Hills have a long tournament history.

The Green Bears defeated Archbold to win the district title in 2013.

Ottawa Hills also handed the Streaks their only defeat of the 2012 season, a 2-1 win in the regional semifinals.