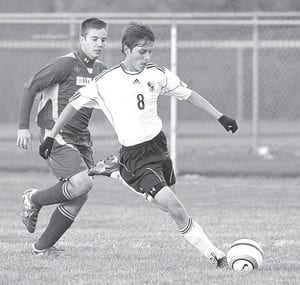 With a Miller City Wildcat on his tail, Blue Streak Santos Quintanilla (8) passes the ball up the field.– photo by Mary Huber

The Archbold boys soccer team raised its record to 17-0 with a 2-1 Division III sectional final victory over Miller City (10-8), Thursday, Oct. 18, at Kalida.

The Wildcats were rewarded just one minute, three seconds into the game when a cross from Brent Riepenhoff was headed by Russell Niese off the crossbar and into the net.

Archbold kept its composure and began to possess the ball and the tempo. Six minutes before halftime, Brodie Nofziger was tripped near the goal and was rewarded with a penalty kick.

Ben Eggers dribbles down the field.– photo by Mary Huber

He drilled the free kick off the diving Wildcat goalie and into the right side of the net to knot the score at 1.

Eleven minutes into the second half, David Bontrager scored what turned out to be the winning goal, taking a short pass from Matt Sevey at 16 yards and shooting it off the right post and in.

With 17 minutes left, Archbold shifted an attack- ing midfielder to a defensive position to help preserve the lead. The strategy was effective in sealing the 2-1 win.

“The boys kept their heads up after allowing an early goal,” said Sean Stewart, AHS head coach. “We dominated large parts of the game, and we eventually got the goals I think we deserved.”

Archbold was ranked 10th in D-III in the final weekly poll of the Ohio Scholastic Soccer Coaches Association, a position it held throughout the season.