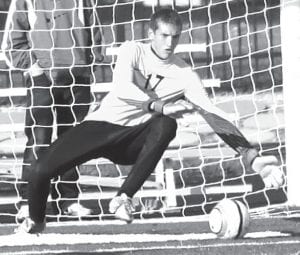 Blue Streak goalkeeper Emerson Radabaugh stops one of three Liberty-Benton shots on goal in Archbold’s district championship game with the Eagles. The Streaks scored a 2-0 shutout to win their first district title in only their third year as a sanctioned sport at AHS.– photo by Mary Huber

The Archbold boys soccer team captured its first Division III district crown with a 1-0 semifinal win over Kalida (11-4-3), followed by a 2-0 verdict against Liberty-Benton (14-4-1) in the championship game.

The pair of shutouts raised the season total to 10 for the stingy defense of the 19-0 Streaks.

The winners play in the regional final, Saturday, Nov. 3, 12 noon, at a site to be determined. 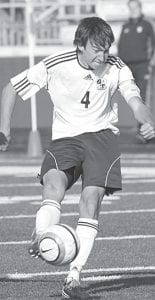 The Streaks and Wildcats renewed what has become an annual tournament clash, Tuesday, Oct. 23, at Kalida, with Archbold looking to avenge losses the last two years.

The two teams engaged in a defensive battle, with the young Wildcats able to fend off Archbold’s prolific scorers for 80 minutes of regulation.

Ben Eggers took a corner kick nearly five minutes into overtime, which was headed toward the goal by Brodie Nofziger.

Wildcat goalie Brent Hovest saved the shot before another Kalida player inadvertently knocked the ball into the net, resulting in an “own goal” and an Archbold victory celebration.

Rain throughout the week caused the Saturday, Oct. 27 district final to be moved in Wapakoneta from the grass pitch at Ryan Field to the artifi cial turf of Harmon Field.

Senior midfielders Eggers and Alex Hurst competed in the 11 am Division III regional cross country meet at Youngstown before traversing the state in time for the 3 pm soccer kickoff.

The Streaks defeated the Eagles 5-1 in a regular-season match at Liberty-Benton.

Twelve minutes after the opening whistle, senior forward David Bontrager cut around several defenders before rifling the ball into the upper right corner of the net from 20 yards away for a 1-0 AHS lead.

After halftime, and with a strong wind to their backs, the Streaks continued controlling the game flow and rarely allowed the Eagles across midfield.

With just over four minutes remaining in the game, Bontrager knocked in an insurance goal from 12 yards on the left side that got the Archbold fans on their feet.

The Streaks took eight corner kicks while the Eagles had none. The shots on goal battle also favored Archbold, 10-3.