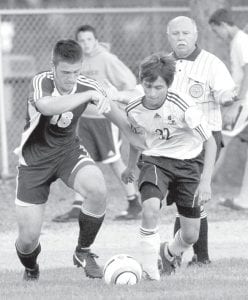 Archbold’s Santos Quintanilla (32) races against Maumee’s Cody Jozwiak for the ball in the Streaks’ 7-0 victory.– photo by Mary Huber (corrected 9/24)

The Streaks improved to 7-0 after earning a convincing 7-0 victory.

Brodie Nofziger and sophomore Matt Sevey each chipped in a pair of goals while David Bontrager added a goal and five assists.

Archbold set the tone early. Nofziger scored just 42 seconds into the match, knocking in a shot from 6 yards after a pass from Bontrager on the right.

Two minutes later, Jacob Ott hit a left-footed chip shot from 18 yards that found the net after a pass tapped from Bontrager.

Sevey gave Archbold a 3-0 lead in the 21st minute with a left-footed strike from the left at 20 yards with Bontrager serving the ball from center.

After halftime, the Panthers held off the Streaks for 22 minutes.

Bontrager flipped a pass forward to Nofziger, who went on a 30-yard breakaway with only the goalie defending, placing the ball in the left side of the goal from 8 yards.

Less than a minute later, Bontrager joined the scoring fest himself, knocking in a goal from 9 yards after Andrew Mayer launched a laser-like throw in from midfi eld to the penalty area for the assist.

Archbold went ahead 6-0 with 11 minutes remaining when Bontrager passed to Sevey for a 20-yard breakaway. Sevey finished by flipping the ball over the Panther keeper into the goal.

Sophomore Oscar Calderon wrapped up the Streaks’ scoring with 9 minutes remaining, cleaning up the rebound after a Mayer free kick deflected off the goalie.

The shutout was the fourth of the season for the Archbold defense.