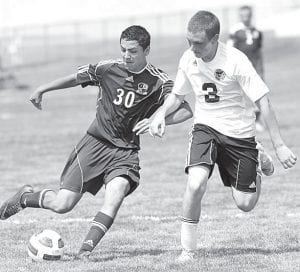 The Archbold boys soccer team gained a 6-1 win over Van Buren and a 4-0 victory over Pettisville to improve to 3-0 on the season.

The visitors started at a quick, aggressive pace, scoring in the seventh minute when Chandler Adams took advantage of an Archbold defensive miscue.

The hosts stayed focused and evened things just two minutes later when Alex Hurst redirected a Brodie Nofziger cross at the goal mouth for the score.

Nofziger finished a breakaway score in the 15th minute by jumping over the diving Van Buren goalie to put the Streaks ahead for good.

Four minutes later, Nofziger converted a penalty kick after being tripped in the penalty area.

In the 21st minute, the Knights’ keeper crossed the penalty area boundary while carrying the ball, resulting in an Archbold direct free kick.

David Bontrager’s ensuing kick rebounded off the goalie’s hands, where a charging Matt Sevey banged in the carom for a 4-1 lead.

The payoff came 16 minutes before the half in an impressive combination. Bontrager sent a through ball to the left corner that was quickly served by Shae Hernandez to an airborne Nofziger, who finished the header goal from eight yards away.

After the 5-1 first half, the pace slowed for the second stanza.

The lone second-half score came in the fourth minute after halftime, when Nofziger was again tripped in the penalty area. He made the Knights pay with his second penalty kick and fourth goal of the day.

Nofziger’s four goals in a game tied the school record for the second time in as many games, and continued his blistering start to the 2012 campaign.

Archbold won the junior varsity contest 5-0 with two goals by A.J. Short and one each by Andrew Mayer, Oscar Calderon, and Jackson Waidelich.

Archbold traveled to Pettisville, Saturday, Aug. 25, for a match with their neighbors.

Hurst again opened the Blue Streak scoring, firing a shot from 18 yards away that found the net in the 10th minute.

The remainder of the first half had numerous Archbold scoring attempts, but the Blackbird defense held the Streaks at bay.

Two minutes after the break Hurst cashed in again, this time from 6 yards away on the left side with Bontrager assisting with service from the right.

Three minutes later, Hernandez sent a cross toward the goal from deep on the left side while Nofziger used a deft left heel tap to finish the scoring combination for a 3-0 lead.

Nofziger added another insurance goal with 18 minutes remaining via a successful penalty kick after he was fouled.

The JV match was a 1-1 draw with Jeremy Lerma notching the goal for Archbold.

After all is said and done, a lot more will have been said than done.–Author Unknown